We have unbeatable specials for Milgard Windows, Masonite, and Simpson Door Company to help you update your home for whatever 2022 throws at you.

See our Savings Page or call for details!

Leaking, cracking windows & doors may be damaging your home and costing you money. New more energy efficient windows and doors may help you save on your energy costs.

What You Need to Know About Windows 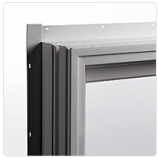 New construction windows typically have a nail fin. When homes are built, the framing is likely constructed of wood studs. The nail fin rests against the outside of the stud, and nails or screws are driven through the holes in the fin. All other exterior materials are then applied and butted up to the frame of the window or trim.

New construction windows also can be used in a replacement project. The exterior materials, such as window trim (if it exists), siding, stucco or flashing, are removed, exposing the wood studs. The new window is then installed as it would have been when the home was originally built. Exposing the original studs also allows your contractor to see potential damage (typically rot) or home settling that may have occurred. The damage can be repaired, and the new window installed with proper insulation to minimize air infiltration between the new window and the studs. As you can imagine, this method can be more time consuming so often costs more than other replace

For either New Construction or Replacement windows, be sure to look for certain features that differentiate between high and low-quality windows. Some key elements to look for include:

The Windows, Doors, and Skylights Showroom!